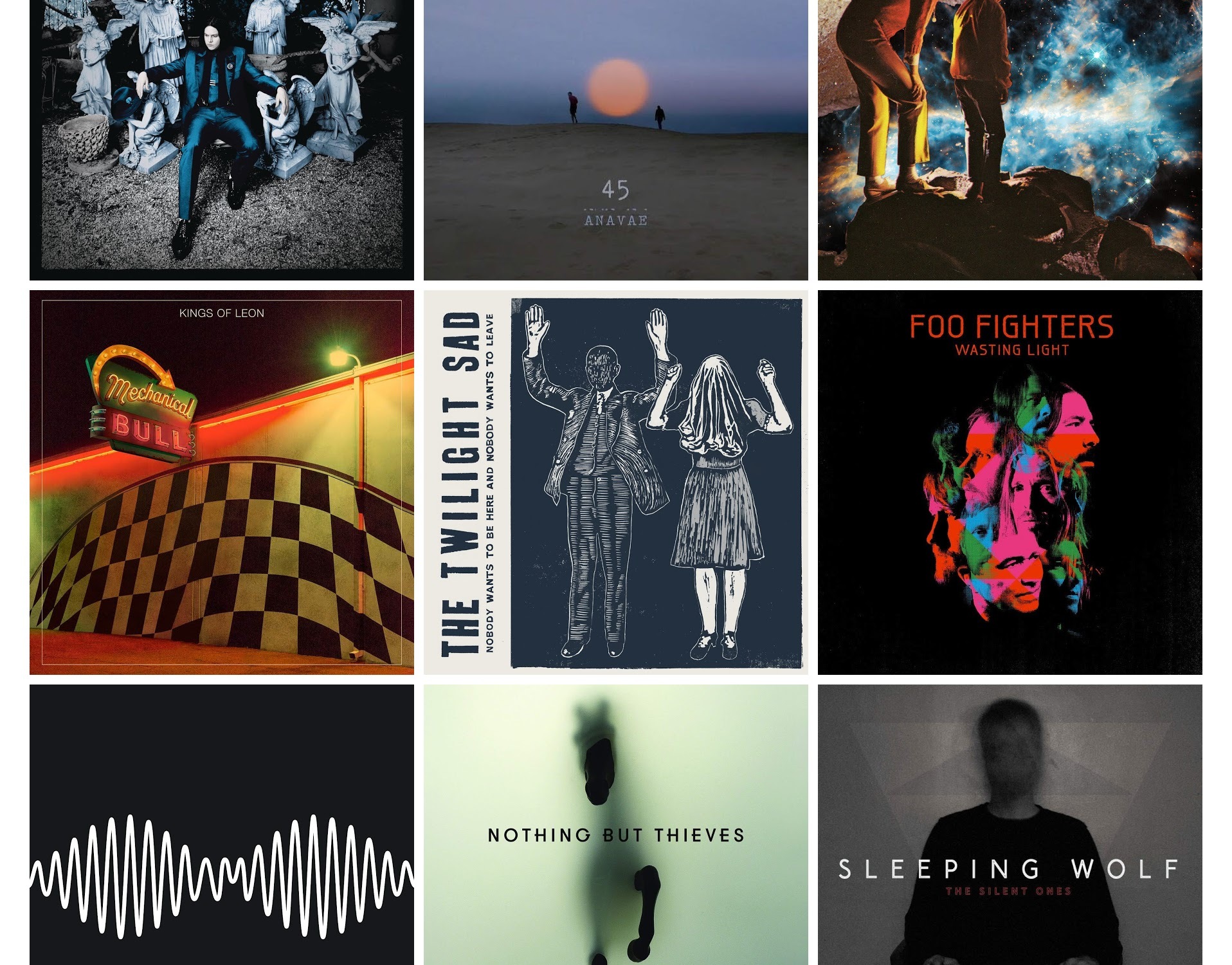 Determining the “best” album of a single year is hard enough, let alone a whole decade. Though I have amassed a great collection of musical experiences over the past 10 years, it’s only fair that I relegate these posts as “favorites” in lists that follow my own arbitrary rules.

Nothing But Thieves, “Ban All the Music”

10. Sleeping Wolf – The Silent Ones

Seldom have I heard of a band so radio-friendly yet so absent from the airwaves. Though this is only a 22-minute EP (they do not have an official album as of yet), you can pair it up with “The Dark” EP and live in a nice alternate reality where there is a darker version of Imagine Dragons on heavy radio rotation.

Defining Moment: “Love Is the Cure” stomps down bigotry with frightful grit. “If hate is the crime, love is the cure.”

There is very little to decipher here: A dirty, genre-blending rock album steeped in addiction and self-worth.

Defining Moment: From the song above: “I stole the power from the sun – I am more than just a man.” That is a perfect line.

The Foo Fighters are objectively good at what they do, spending the past three decades pumping out grungy, inoffensive every-man anthems. This album has a deeper lore and broader sound than most of their recent works, perhaps because it was something of a reunion for past and present members of the band.

Defining Moment: Looking back on this album for this review, I can’t believe how many great songs are here. But none of them can outdo “I Should Have Known,” one of the few times Dave Grohl has directly addressed Kurt Cobain’s death (along with a guest appearance from Nirvana bassist Krist Novoselic).

This is a quintessential Roundtable rock band: Youthful energy that strays a little too close to the shadows. Their debut album (just a couple months ago!) did not disappoint.

Defining Moment: I was caught off guard by the frankness of “Human”: “I want to skin you alive. I want to wear your skin like a costume.”

I would not say that line suits them, but it rules.

Mmm, those riffs sure are tasty.

Defining Moment: I have belted out “I’ve got three women: red, blonde and brunette,” so many times, you would think that the song has some direct relevance to me.

One of my friends worshiped the Arctic Monkeys, to the point where his obsession almost turned me off to them entirely. What a blow that would have been to my need for hip licks!

The moral: Listen to your music-loving friends.

Defining Moment: During the final round of my first Music Trivia Bingo session, my team needed a blackout to win the whole shebang. All I needed to see was that black and white squiggle on the video screen. When I did – glory.

This is a weird corner of alternative rock I think can only can be born on the other side of the Atlantic. That Glasgow accent drones like molasses and that deep guitar paints a pastel masterpiece.

Defining Moment: I wrote about them previously on this blog and mentioned the crushing bridge. I nail that accent every time: “Don’t da-hre, don’t you da-hre say no.”

This has been one of my favorite lists to write about because each of these artists has an edge. I am not worried about the state of Alternative Rock.

Here, we’ve got thicc beatzz and those sky-piercing vocals. One of The Roundtable’s favorite bands from the decade.

I just realized that about half this list is from across the pond.

Defining Moment: This album expels immense emotions throughout, but “If I Get High” is one of the saddest songs you’ll hear this decade.

Let this be an encouraging lesson: No matter how you feel about a band at any particular time, that relationship can change like the seasons.

In my ignorant youth, I despised this band. But we both changed enough and in the same direction, to the point where this album is about as easy to listen to as watching the sun set.

Defining Moment: One of my favorite all-time lines comes from the coming-of-age “Comeback Story”: “I walked a mile in your shoes. Now I’m a mile away and I’ve got your shoes.”

When the surgeon opened me up, I was undone. I underwent a procedure in 2012 that had a ripple effect on my entire life, essentially reverting me back to something less than zero. Everything that defined me was gone.

QOTSA frontman Josh Homme had an even worse experience during his bout with MRSA. He was clinically dead for a couple minutes. He was bed-ridden for four months. To crawl out of that condition can suck the soul right out of you. This album is him trying to get that soul back.

Defining Moment: “I Appear Missing” is one of the supreme rock masterclasses of our time.