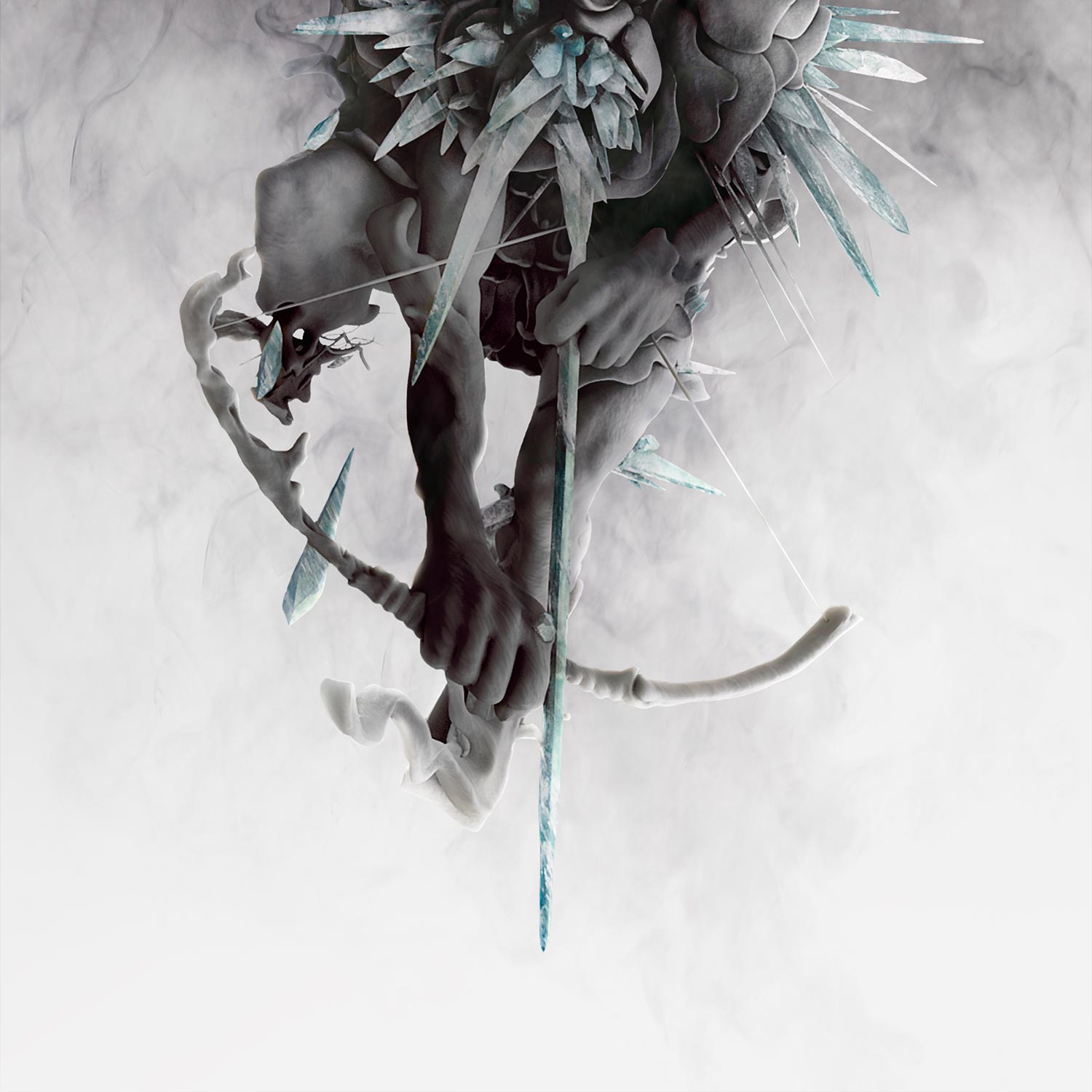 Today, I look for a sign
With flames in my hands,
A line in the sand,
Between yours and mine

Former nu-metal/experimental/polarizing/genre-defying rockers Linkin Park have released their sixth album, their most explosive effort yet, entitled The Hunting Party. It’s full of energy, but of a different sort than longtime fans are used to.

Going against the spirit of standard New Music Tuesday posts, this is a very thorough analysis.

At the Billboard Awards in May, Lorde won Best Rock Song with “Royals” and Imagine Dragons won for Best Rock Band and Album. That irked some people to say the least:

That tweet is dripping with subtext. Thus, The Hunting Party.

Co-frontman Mike Shinoda has made it abundantly clear that today’s rock music is suffering. I share some of the same sentiments. So when all of the demos Shinoda made for this album sounded inspired by the likes of Vampire Weekend, CHVRCHES and Haim, he ditched them all. The music scene doesn’t need what it already has. What was missing? Pure, unfiltered aggression. That’s what this new album is.

Look at the guest stars on this album: Page Hamilton from Helmet, rapper Rakim, guitar magician Tom Morello and Daron Malakian from System of a Down. Those guys aren’t exactly relevant today as they once were, which shows you where The Hunting Party finds its inspiration.

There is a moment in Linkin Park’s Live in Texas DVD (2002) when co-frontman Mike Shinoda asks the crowd to form he biggest mosh pit he has ever seen. Then, in an odd placement of brotherly love, he tells the crowd to pick up anyone who happens to fall in the mayhem. They want to be bad, but they are polite by nature.

This isn’t a bad thing. It’s allowed them to become one of the most benevolent and well-received bands in the 21st century, establishing a massive worldwide fan base. But the one complaint most people have had since 2007 is this: Where’s the Hybrid Theory/Meteora sound?

Hypothetically speaking, what if the last four albums since those had the same nu-metal angst, the same woe-is-me aggression and the same cookie-cutter song structures? The band wouldn’t exist anymore.

Maybe they would have faded into oblivion as another casualty of stagnation, but I think Linkin Park would have put themselves down if that kept up. These guys are too good to be pigeonholed and are self-aware enough to do something about it.

No one ever mentions that the six members of this established incarnation of Linkin Park has remained entirely intact for a decade and a half. The list of bands to accomplish such a feat is minuscule at best. They have had time to gel, expand and diversify on each album and that’s all you can ask out of a band. Furthermore, most of them have all expanded their diverse musical endeavors with side projects, only to come back and realize that being in Linkin Park can fulfill that need.

They don’t have the same personal problems as they did 15 years ago, ones that spurred classics such as “Numb” and “In the End.” Their butts were getting kicked, and they wrote about it. In 2014, they are kicking butt and writing about that. So, unless something tragically unthinkable happens in one of their lives, the essence of Hybrid Theory/Meteora will forever reside in Hybrid Theory/Meteora.

Linkin Park has had several songs over the past few albums with a subtle message to those Hybrid Theory/Meteora purists: F*ck that.

In as polite a way as possible, of course.

This band has made astronomical strides in 15 years and they have done it in a way that makes it rather easy to break down:

Minutes To Midnight: Mike can sing, they can use cuss words, they removed the layering on Chester Bennington’s vocals, they had their first guitar solo, they implemented some pop.

A Thousand Suns: To this day, their crowning achievement. A digital soundscape so diverse and driven, that it alienated many of their fans. But this is when they really started to throw vicious curveballs into songs (ex: “Blackout”). There is no album like this anywhere.

Living Things: Inspired by today’s “indie” pop scene, they just had to get this out of their system. Oh, and guitarist Brad Delson gets a vocal track.

Speaking of Delson, we come to The Hunting Party. It’s got guitar. A lot of it. I don’t think anyone ever thought of Delson as a transcendent guitarist before this, but, the way Linkin Park operated, he didn’t have to be. So considering that he’s just now being thrown onto the battlefield, it’s not a terrible job. Not groundbreaking, but good enough.

You’ll see a couple highlights (“Final Masquerade”) and lowlights (“Mark the Graves”) below. But all in all, when I listen to this album, I want to wreck all in my path, which is the point. The energy is nostalgically focused, fighting for what inspired us when music actually made you feel something. When it was real.

There are times here when I get excited on what Linkin Park could be, meaning this was a positive and possibly necessary step for the band. This album was self-produced. And, if you didn’t know, Linkin Park usually makes their music like most rappers – lay a track, layer it, edit it, perfect it. This album was made out of jam sessions, and the results are spontaneous and much more personal. It shines though on The Hunting Party.

Where does it fit into the Linkin Park catalog? It doesn’t. But in a way, doesn’t that mean it fits in perfectly?

Even former album openers “Papercut” and “Lost In the Echo” gave listeners a chance to get settled before unleashing the fury. But these guys are done being nice. Bennington’s ravenous screams and Shinoda’s sing-to-rap combo set the tone perfectly for what’s going to be a punishing ride.

2. “All For Nothing” feat. Page Hamilton (Helmet)

In between some more heat-seeking Shinoda verses (there’s a lot more rapping on this album), this gem is a fist-pumping anthem reminiscent of 90s-00s punk rock. Seeing this live would be a treat.

Dark, unapologetic and with purpose, the first “single” from The Hunting Party stands as one of the highlights. The verses feature a military march-like drum beat while Bennington rails against corrupted power. Rakim, who has been relatively unheard from in years,  drops in and spits it cold. “Guilty All the Same” is where pop songs come to die.

A minute-long instrumental preparing you for “War.” Now’s a good time to mention the random transitions between songs, which solidify this record as being completely un-Linkin Park and entirely Linkin Park.

This song belongs on a Tony Hawk Pro Skater soundtrack. Bennington grinds out this little fireball with spastic force. At two minutes, this song still packs quite a punch, though it lacks any kind of cerebral stimulus. It’s bizarre to hear a song like this from a band like this.

Here’s one for all you Hybrid Theory/Meteora fans. This ground-stomper opts for the classic Shinoda/Bennington rap/scream combo. It’s got some attitude and sounds like new twist on an old favorite. Notice how Shinoda has increased his rap game over the years, making his lines harder to memorize. That may play a part in the animosity for the band’s newer material.

If you wanted a semblance of what Linkin Park was before this album, here’s your bridge. Lyrically, this song is similar to a few demos from the Minutes to Midnight era, namely “What We Don’t Know” and “Pretend to Be.” It’s a little cliche, but it’s going to make a few movie trailers much spicier.

By this point, you should notice that the band has seemed to do away with cool lyrical bridges that made them so successful in the past (“I put my trust in you…;” “And I know I may end up failing too…”). That could have made this simple song into something more substantial for the advanced listeners. Regardless, it’s the cleanest and most precise sounding song on the record.

8. “Rebellion” feat. Daron Malakian (System of a Down)

Perhaps the pinnacle of The Hunting Party, “Rebellion” puts a dark spin on the harmonies Bennington and Shinoda perfected in “Castle of Glass.” Delson has had plenty of time to shine on the album, so Malakian’s haunting licks are a welcome change of pace while Shinoda’s earthy vocals lead into a grand chorus, one of the best the band has ever produced:

As it stands, this may be my least favorite song Linkin Park has ever produced. That includes demos, side projects and everything from Mmm… Cookies Sweet Hamster Like Jewels from America. If this was an instrumental, it would be fine. But after the beginning verse, Bennington goes into drone mode, and this band is capable of so much more. Whatever genre you’d put Bush or Jane’s Addiction in, I’d add this song. That’s not to say it won’t grow on me, but eh.

This piano/guitar instrumental could have gone on for 10 minutes. It was too short because with all the crashing and explosions throughout this album, this was a welcome moment of peace. Morello is an unparalleled champion of exotic guitar sounds, so I hope some of that rubbed off on Delson for the future.

Besides being The Hunting Party‘s exceptional ballad, “Final Masquerade” could be a monumental song for the band going forward.

To see the evolution going on here, let’s look back at the song “Powerless” from Living Things. Both tracks are similar in that Bennington is unleashing all of his emotion on a crumbling relationship of some sort. But there is one distinction between the two that makes all the difference.

“Powerless” is primarily digital in composition, with some piano accompaniment. The climax of that song around the 3:05 mark has multiple forces at work: a brief guitar riff, vocal “Oohs” and synthetic beats. It pummels you sonically, which makes it a powerful song.

But around the 2:10 mark on “Final Masquerade,” Delson whips out perhaps the best guitar solo of his life. It’s just him at the forefront, the drums keeping pace, with no sound effects, vocals or interference. But it delivers an incredible heart-gripping response I didn’t even feel on “The Little Things Give You Away,” the last time Delson’s guitar performed such an undertaking.

It’s my favorite moment of the album: the moment when the masters of synthetic sound created something entirely human. Triggering emotional responses to songs doesn’t have to fall solely on the vocalists. Looking forward, I hope that Delson won’t shy away from taking charge on a track when he finds the right inspiration.

We close on a song that brings the left brain and right brain face-to-face, a circle this band constantly battles with. At six and a half minutes, this song is a lot of fun, though the guitar riff sounds briefly like it wants go into “Guilty All the Same” with some “Victimized” in there. Delson has his own distinct sound, at least.

Shinoda starts with a chilling verse about high-stakes naivete as the guitar and drums build us up for Bennington’s volcanic retribution. Add in a cool rap verse, rinse and repeat.