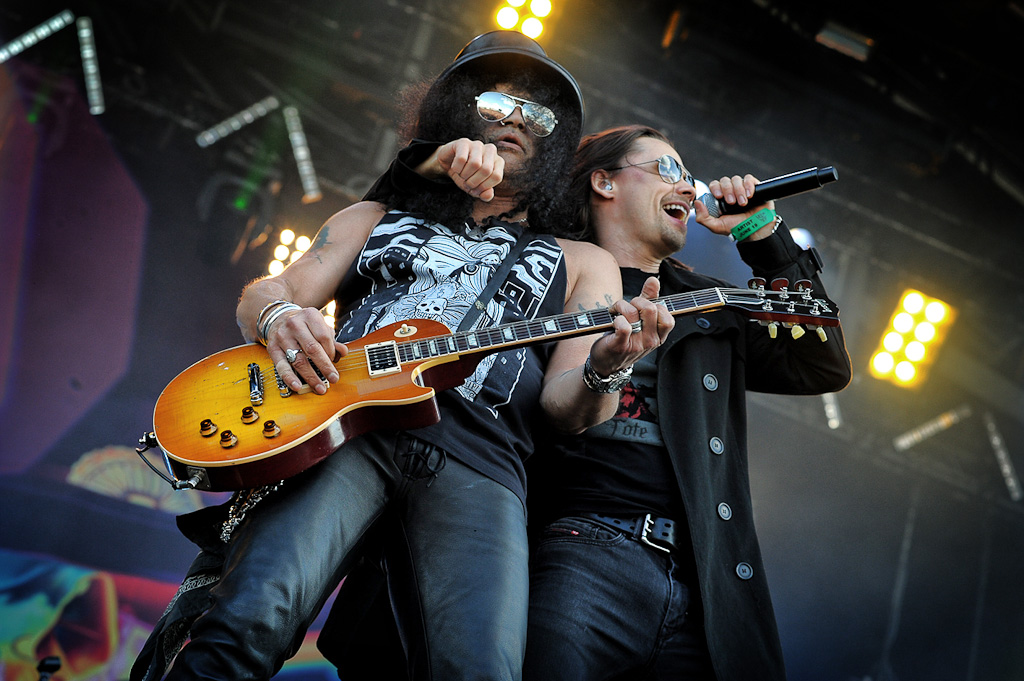 When Slash and Myles Kennedy released Apocalyptic Love this year, it should have been the rock version of Watch the Throne.

It had Slash’s signature guitar licks and it had Myles Kennedy’s penetrating vocals, the best union of head-banging talent since Audioslave. Yet, the album left me unfulfilled, as if I had heard this before in some other incarnation. Kanye and Jay-Z’s efforts only reshaped a genre.

So if these two couldn’t churn out a legendary collaboration, I pose a question: “Who is the best rock band today?”

The statement poses a multitude of conflicts because it hinges on a vague label. An easier question to answer: “Who best embodies the progression of ‘rock’ music?”

My brother said something the other day that infuriated me like you’ve never seen. He (who I should mention is in an aptly labeled “rock” band) said that someone he knew in the music industry blamed bands such as The Killers, Coldplay and The Bravery for the decline in rock music’s popularity.

I don’t know the guy, but that is the most off-base, tainted and ludicrous statement I have ever heard. It’s a simple concept: rock bands aren’t that popular because they refuse to progress. The actual best “rock” bands of today are the very example of what general rock fans are against, which is why there is a stunt in the genre’s growth. The fans alienate themselves from their own music.

I hate labeling music by genre because it puts misleading preconceived notions of a particular band into your head from the onset. From then on, if it doesn’t fit the mold, then it’s not good music.

Each band should be identified by their name alone. Of course, there the general artists that merit genre labels. Luke Bryan is country, Katy Perry is pop and Drake is hip-hop. There is nothing wrong with it, but I can’t call any artist “The Best” if it fits exclusively and easily into its own genre.

So for the purpose of this post, I have to broadly define “rock” as a general term for heavy/ aggressive music that emphasizes big sound. By this terminology, the Killers are not rock. The Bravery is not rock. Coldplay is definitely not rock. They all fall into useless sub genres, which I also hate, but I will still defend my case from the angle in which I am opposed.

I love general rock music. Three Days Grace, Shinedown, the Used, Seether, Disturbed, Evanescence. If I had to pick the best bands today, however, I wouldn’t consider any of them, though there are many very good ones I haven’t named. This does not mean that they are bad bands; some of them excel at what they do.

However, guitars, drums and bass have been around for ages and there is only so much you can do with them. Even the rage and self-centeredness in the lyrics is getting stale. There is an ascension of rock music that traditionalists are unwilling to take, but to stay relevant, they have to go bold. It can be as simple as adding a keyboard or an orchestra.

Corey Taylor, the frontman for Slipknot and Stone Sour, is an idiot. Anytime an artist wants to do something un-rock like (Chris Cornell doing an album with Timbaland), he has to take a dump all over it. Bogus. That guy I mentioned earlier is the same way. The Killers made music how they wanted to make it, never trying interject and ruin a scene that clearly wasn’t in their demographic. So you blame them for being different and a detriment to your genre. How American.

So to answer the question above, here are the best “rock” bands in a tiered list that is sure to irritate a lot of “rock” fans. Keep in mind that it’s 2012, aka the future:

I didn’t bother explaining in detail why I chose these particular bands, but if you have suggestions, I would love to hear your thoughts.